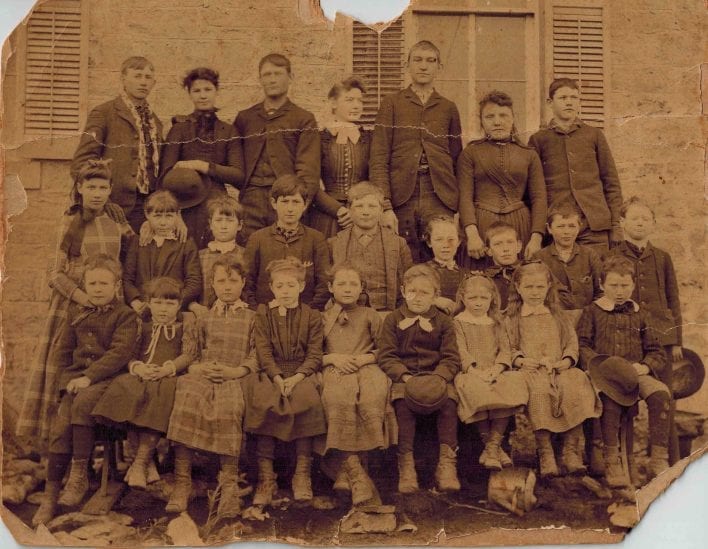 Children are our greatest treasure, our hope for the future.  Through them, we have a sense of immortality, a chance to live on well after death.  For the past six weeks, we have been looking back at the children of the Lecompton township through the school photographs in the collection of the Lecompton Historical Society and the Territorial Capital Museum.  The work was funded by a KSHRAB (Kansas State Historical Records Advisory Board) grant to scan and catalog the rural and Lecompton school photographs in the collection.  The primary goal of the project was to share these photographs with a larger audience by making them available on the KSHS’s kansasmemory.org website and to enable people to reconnect with their ancestors and the fabulous history of the Lecompton area.

From the early territorial days of Kansas, education of the children has been one of the primary goals of the citizens of Douglas County.  In the early 1850s, the children were often taught in homes, barns, or stores before schoolhouses could be built.  With the desire to create permanent schools, early residents raised funds for the construction and operation of schools, made desks and benches, and hired the teachers.  These schools represented more than just a place for educating the children from the surrounding area.  They were often used as churches and community centers, hosting debates, plays, picnics and other social activities.

School class photographs provide a means of documenting multiple children at one point in time as well as the schools that were built in which to educate them.  One can see multiple children in a family, childhood friends, and future spouses in just one photo.  With the large collection of photographs at the Territorial Capital Museum, one can also see descendants of each generation, creating a visual family tree.  One advantage of the collection at the museum is the donors have documented the identities of the students!  The faces in these photographs have so much more meaning because they have a name and through that name, they can be connected with their history.

Throughout the course of the project, we would find many hidden gems.  Photographs that captured our eyes and touched our hearts.  Who were these children?  What became of them?  Did they live a good life?  Of the more than 200 photographs processed, one particular photo and one particular face haunted me. 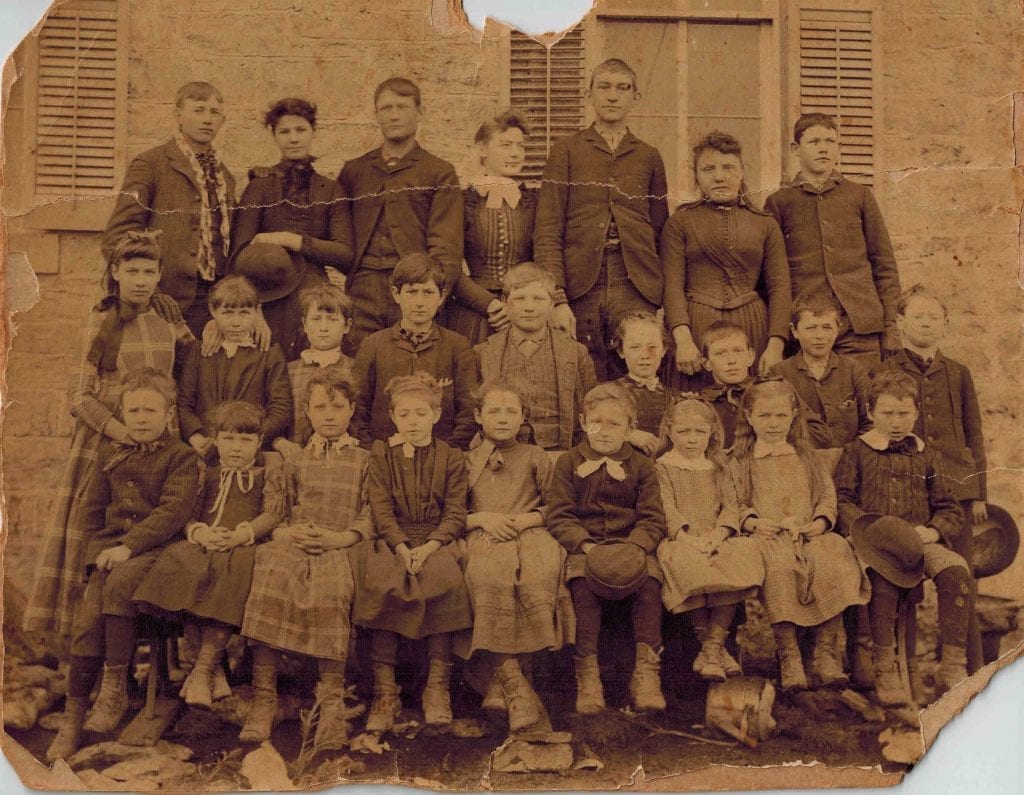 This late 19th century photograph is a class photograph of the Glenn School, a one-room schoolhouse that still sits approximately two miles west of Lecompton.   The native limestone school built by Chris Christenson, a Swedish stonemason, serves as the backdrop to the three rows of students.  In the back row, the tallest boy, third from the right, is the face that I will always think of when I recall my time working on this project.  Many nights I would wake thinking of the project, and this was always the face that came to mind.  Who was the tall young man with the stern look on his face?  A notation on the back identified him as “Henry Peasly” but I could find no census records or newspaper stories for this name.  I tried multiple variations of spelling and switched the order of the names around with no success.  It wasn’t until I ran across an obituary for William Henry in an old issue of the Lecompton Sun that I uncovered the true identity of the young man, John Pearl Henry.  The young girl standing to the left of him in the Glenn School photo appears to be Katie Moore, who later became his wife. 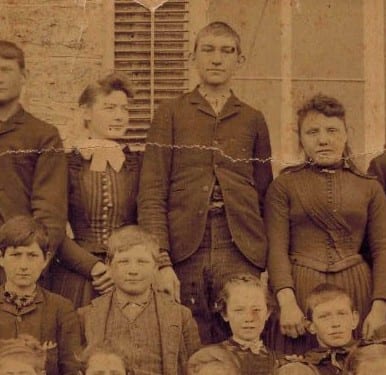 William Henry, a native of Indiana County, PA, came to Kansas in November of 1868 following his service in the Civil War.  He brought his wife and two children, David K. and Leni, along with him and settled in the Lecompton township on land in Sections 8 and 17.  His first wife Jane died in 1873 and is buried in Maple Grove Cemetery.  In 1874, William married Rachel Catherine Hickox, another native of Indiana County whose family had moved to Kansas.  To this union, two additional children were born, John Pearl “Pearly” and William.  Based on the obituary, both of these sons had preceded their father’s passing in 1913.  Immediately, I began to scour records on-line and in the collections of the Territorial Capital and Watkins museums to learn what happened to Pearly.

John Pearl Henry was born  March 26, 1875 in Lecompton.  He grew up on the family farm west of Lecompton.  He attended the Glenn school with his brother Willie, who died in 1892 from a spinal disease.  Based on many newspaper accounts, Pearly was a champion speller in the area.  He attended Lane University for a time before going into the mercantile business with D. A. Geelan in Big Springs in 1894.  Besides operating the store,  he also traveled the countryside selling butter, eggs and other goods.  The partnership lasted for only about two years and he returned to farming as an occupation.  In August of 1899, John Pearl married Sarah Katherine “Katie” Moore, a former classmate at the Glenn School and a school teacher.  Following their marriage, Pearly and Kate took over the Henry farmstead and his parents moved to Topeka.  In May of 1900, the young couple welcomed their first child, Princess Juanita Henry.  Another daughter joined the family in the next year, Laura Vernon Henry.  In 1902, Pearly and Kate bought the farm from his parents.  Unfortunately, tragedy would strike the young family just two years later on March 24, 1904.  John Pearl Henry drowned while floating logs to a saw mill in a rain-swelled tributary of Coon Creek.  Following Pearly’s death, the young widow quickly sold the livestock and farm machinery to provide for her daughters.  George J. Bahnmaier was appointed guardian of the estate and the Henry family farm was sold to Charles F. Bahnmaier for the support and education of Princess and Laura.  In 1909, Katie married Benjamin Franklin Wizer, president of the Lecompton State Bank, and they raised the two young girls. 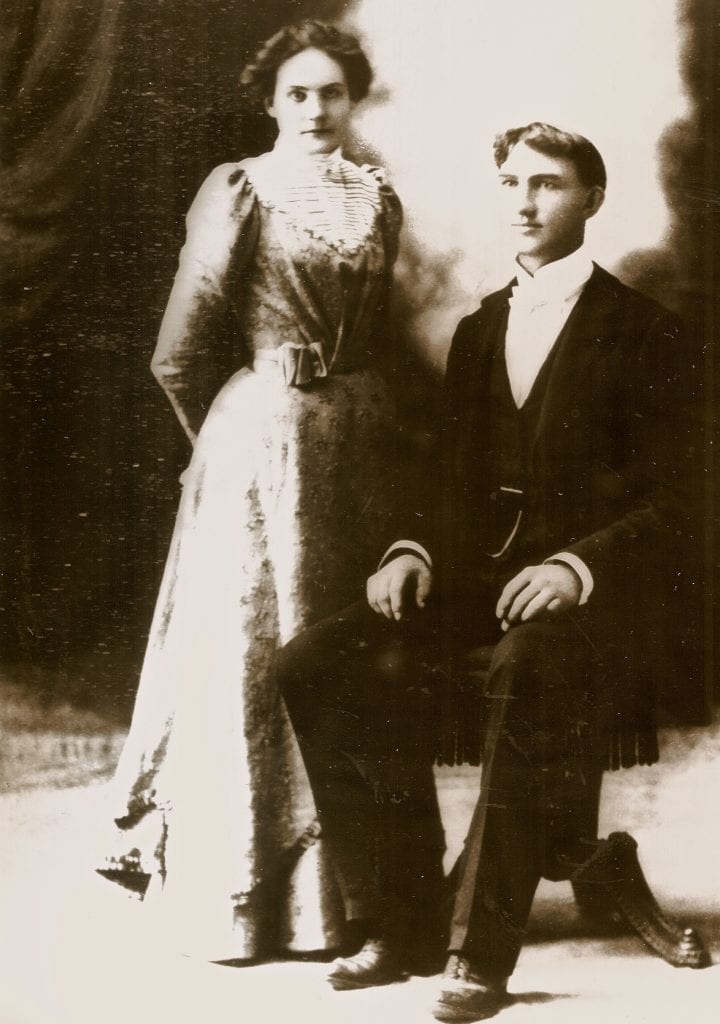 John Pearl and his wife, Kate

Starting with a single class photograph and research of newspapers, census, land  and other records, a treasure of the township was uncovered and his life story was revealed.  Today, the stone house and some of the farm buildings which once belonged to the Henry family remain in the Lecompton township.  A family quilt, photographs and other artifacts of the Henry family can also be found at the Territorial Capital Museum. 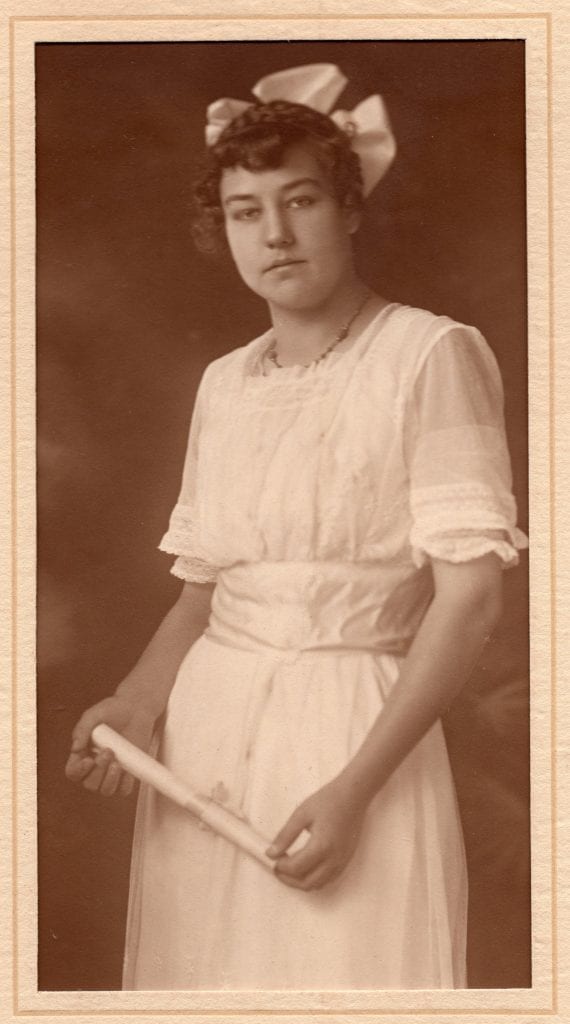 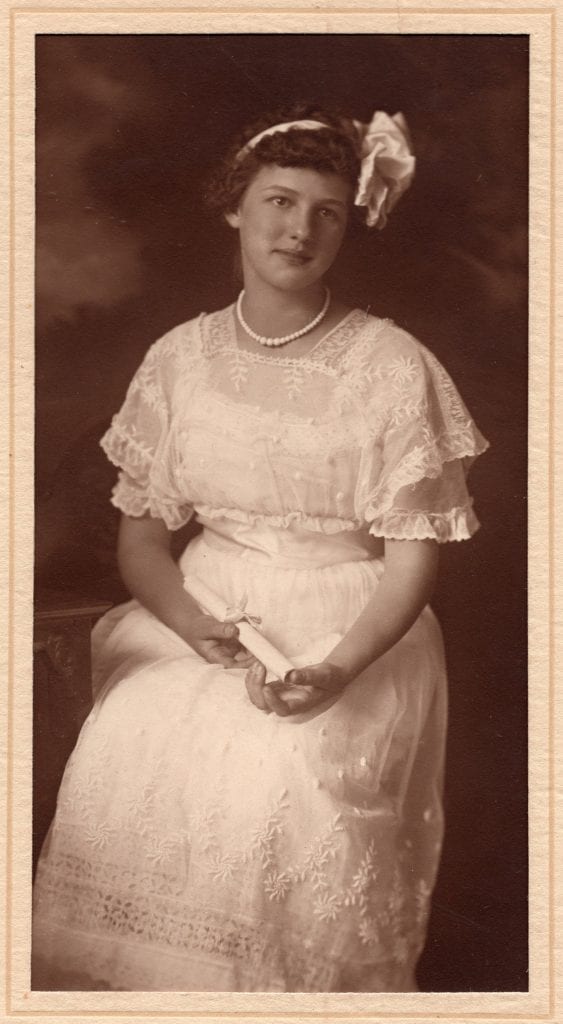