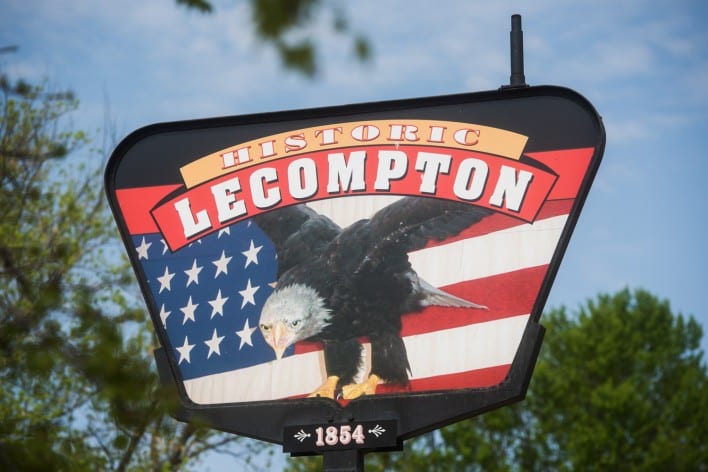 Lecompton was founded in 1854 and platted on a bluff on the south bank of the Kansas River. It was originally called “Bald Eagle,” but then later changed to Lecompton in honor of Samuel D. Lecompte, the chief justice of the territorial supreme court. In 1855, the town became the permanent and only official capital of the Kansas Territory. President James Buchanan appointed a governor and officials to establish government offices in Lecompton, and construction began on an elegant capitol building, Lane University / Territorial Capitol Museum

In the fall of 1857 a convention met in Constitution Hall and drafted the famous Lecompton Constitution, which would have admitted Kansas as a slave state. The constitution was rejected after intense national debate and was one of the prime topics of the Lincoln-Douglas debates. The controversy contributed to the growing dispute soon to erupt in civil war. The Lecompton Constitution failed, in part, because the antislavery party won control of the territorial legislature in the election of 1857. The new legislature met at Constitution Hall and immediately began to abolish the pro-slavery laws. The victorious free-state leaders chose Topeka as capital when Kansas became a state in 1861.

At one time, Lecompton had six active churches. At present, one church, the United Methodist is still located in a unique building. When the Lane building was sold to the school district, the former United Brethren Church bought the Windsor Hotel. For a comfortable, easily accessible meeting place, they removed part of the second floor making a large, beautiful, high ceiling sanctuary. They also renovated the basement to give them ample class room space. The church is unusual in its appearance both inside and out.

When the frame business buildings on the east side of main street (Elmore) were destroyed by fire in 1916, they were replaced with brick structures that are still in use. A mural depicting the town as it appeared before the fire is located in the local post office building.

In the 1880’s there was some dissension in the United Brethren Church concerning secret organizations causing the congregation to split. One group built another church on adjoining land which they named the Radical United Brethren Church. It burned about 1902 and a lovely limestone church replaced it. Today, the building is used as the City Hall and for many special occasions.

The happenings in the Kansas Territory caused a rupture in the relations of the North and South. There was constant conflict between the pro-slavery and free-state factions. Lecompton was considered the center of the pro-slavery movement, which of course was unsuccessful. Kansas entered the Union on January 29, 1861, as a free state, and the Civil War began.

In 1998, the Lecompton Historical Society had the good fortune to purchase and begin restoration ion the remains of the native limestone Democratic Headquarters Building (circa 1850’s). Originally there was a log cabin connected to the west side of this building located on East Second Street. Today, the historic building sits along the south limestone bluff of the Kansas River, overlooking the Kaw Valley basin to the north on a majestic Riverview Park area. This park area is open to visitors.

Lecompton has put aside its turbulent past and is now a delightfully quiet, pretty place and the people are proud of their part in the history of Kansas and the nation.

We would like to extend an open invitation to you, to take a step back in time, to look at the rich heritage that led to the formation of our town and the State of Kansas.