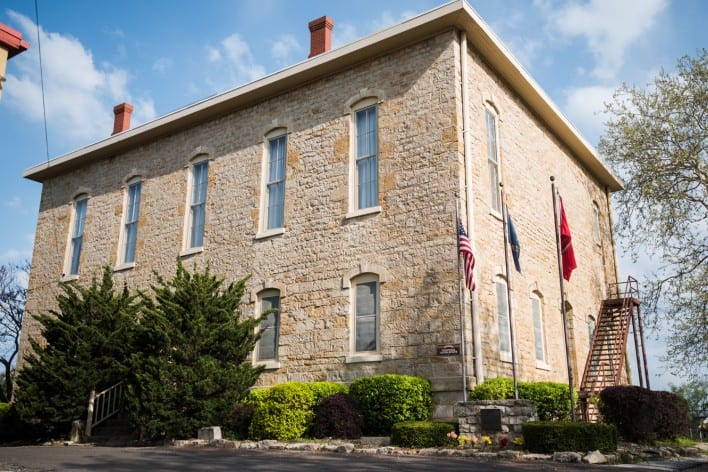 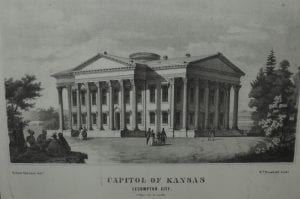 Drawing of the Proposed Capitol Building in Lecompton. The foundation was set but the building was not finished. The Lane University building was built on this spot.

The capitol building was started with an appropriation of $50,000 from the United States Congress. It was completed to the bottom of the first floor windows when the United States House of Representatives defeated the Lecompton Constitution by only eight votes.  (The U.S. Senate and President James Buchanan encouraged its adoption.)  This meant that Kansas failed to enter the Union as a slave state with Lecompton as its capital.

By early 1858, it was evident that Lecompton was not going to become the Kansas Capital and as the money had been spent, work on the capitol ceased.  At that time, the foundation for three wings had been laid, the center section had been completed up to the top of the first floor windows, and all the materials needed to complete the section, including four pillars, were laying on the ground.

This is what the uncompleted capitol building looked like in Lecompton. Lane University was built here. From Andreas History of Kansas, vol 1, p 179, 1883 ed. 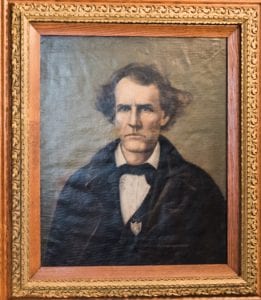 Portrait of James H. Lane at the Territorial Capital Museum in Lecompton, Kansas.

It was in this shell that the Lecompton people attempted to stop James H. Lane, a Free-State Jayhawker, from destroying the town in 1856. With the help of Camp Sackett Cavalry, they succeeded in stopping his assault. Lane was attempting to rescue the “to be” Governor, Charles Robinson, from jail, as he had recently been tried for treason. He was acquitted, but was being held while certain legal formalities were completed.

It was also from here that the 13 stone masons who were working on the building picked up their guns and headed south on the Lecompton road to meet Colonel Shombre and Captain Walker, in their projected attack on Lecompton. This was to be known as the Battle of Fort Titus (1856).

Beginning of Lane University  Lane University is a huge part of Lecompton history.  When the United Brethren wanted to start a University in Lecompton at the end of the Civil War in 1865, it resurrected a dying town.  Lecompton lost the capital when Kansas entered the union in 1861.  The population plummeted and buildings and hotels sat empty.  When the university first established itself in Lecompton in 1865, it occupied the Rowena Hotel.   Professors, students, and church officials moved to town.  Rev. Solomon Weaver was the first president.  The university got its name from U.S. Senator James H. Lane.  Jim Lane was a main free-state leader, and Lecompton was previously the capital of the opposing pro-slavery faction.  Local tradition notes that a funding drive to construct the university promised to name it after the major contributor.  Allegedly, James H. Lane made the largest pledge, received the namesake honor, and then died of a self-inflicted gunshot wound before he could carry out his promise. 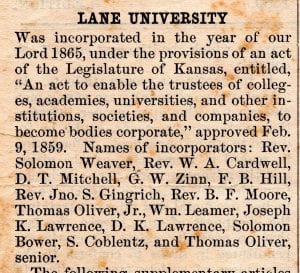 Lane University was incorporated in 1865. 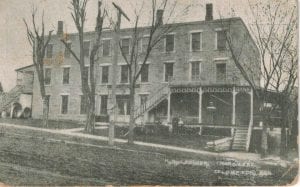 The opulent Rowena Hotel was built in 1857 and was used extensively by members of the Territorial Legislature and others. Lane University occupied the hotel from 1865-1882 when the new building was constructed.

The university was first located in what had been the Rowena Hotel, which was a three story stone structure built for the legislators to live in while in session.   In 1865 the state donated to the university 13 acres of land that included the foundation of what had been intended to be the Kansas Territorial Capitol building at Lecompton.

Using some of the materials that were left from the unfinished capitol building, and resting upon the South part of the foundation of the capitol, the Lane University finally had its own building in 1882.  It had two stories and a basement with pine floors.  Evans and Stone constructed the stone work.  It took a year and half to build and was liberally contributed towards by Lecompton citizens and the students themselves.  After the university building was finished, the Rowena Hotel still was used as the dormitory for the students.  Some students lived with Lecompton families. 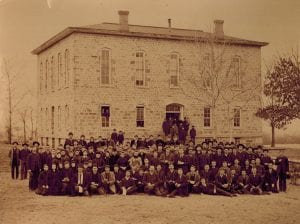 Lane University in Lecompton, Kansas. This building was built in 1882. It was architecturally unique with a self-supporting roof.

The building had a self-supporting roof, architecturally unique in the area at that time.  It was at this college that David J. Eisenhower and Ida Stover met and decided to marry. They later became the parents of Dwight D. Eisenhower, who was our 34th president.

David Eisenhower and Ida Stover met each other when students at Lane University. They were married upstairs in the chapel Sept. 23, 1885. They are the parents of Dwight D. Eisenhower, 34th President of the United States. Artwork at the Territorial Capital Museum (Lane University) in Lecompton, Kansas.

The Church of the United Brethren in Christ owned and controlled the school during its entire history. Almost all of the presidents were pastors. 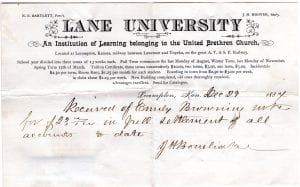 Receipt for tuition to a student from Lane University in 1884.

There was an average attendance of from forty to seventy-five co-ed students studying a broad and varied curriculum.  Pupils studied everything from science, to business, to arts, to the classics.  Many clubs and societies occupied the students’ free-time.

In 1890, Lane University made plans to expand the building.  The architect hired to draw the plans was John G. Haskell.  The expansion was not carried out. 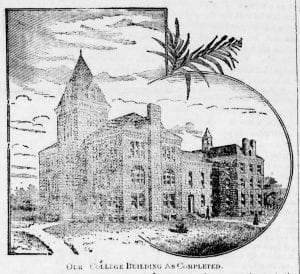 There were plans to enlarge Lane University in Lecompton in the early 1890’s. The architect for the plans was John G. Haskell. Drawing from the school newspaper, College Echoes, Tues, April 1, 1890, from the archives at the Territorial Capital Museum.

In 1900 it had 11 faculty members and 178 enrolled students.   Lane University prospered until 1900 when church officials and Lecompton residents conflicted over whether or not church members should also be members of secret societies.  Those who did not believe church members should join secret societies started their own Radical Church.   Lane University was moved to Holton, Kansas in 1902 and was united with Campbell University to form Campbell College (Kansas).

Lane University had an extensive curriculum and options for course of study.

Board of Directors, Faculty and Staff of Lane University in 1880. 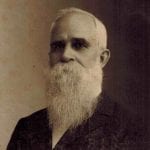 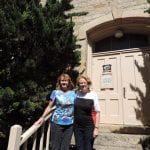 After the University Left Lecompton  After the university moved out of the building, the city of Lecompton used it as a high school, church, and community area. 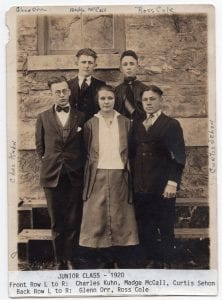 After the University left Lecompton, the Lane building was used as the Lecompton High School from 1903-1928.

After the Lane University building was no longer actively used, it fell into disrepair.  Almost all of the windows were broken out.  The roof leaked at the chimneys, letting water run to the basement.  The floors in most places were rotted out.  The walls peeled.  Wainscot and other removable items were salvaged by the community for other purposes.   School kids, against their parents’ warnings, snuck in and hung out in the building, sometimes leaving behind graffiti and more damage. 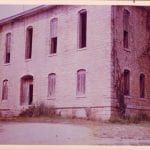 Lane University with all windows broken out. 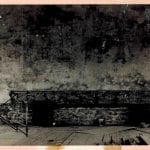 Chapel area where stage used to be located. 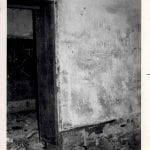 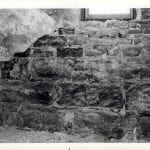 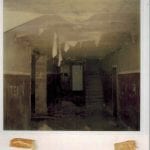 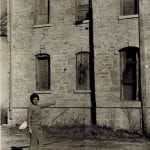 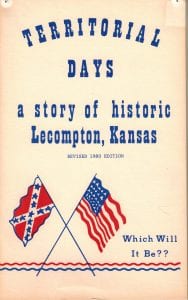 One of the fundraisers used to rehabilitate the Lane University building was the sale of history booklets.

In the late 1960’s, Lecompton citizens began to be aware how important the building was to their community.  The 1970’s saw the beginning of the Lecompton Historical Society.  Members of the society started the huge task of cleaning out the debris that had accumulated in the basement and started plans to save the building.  They worked with the Kansas State Historical Society and the Preservation Office to rehabilitate the building, including replacing the roof.  It took them years to raise the money and do the work.   The Lane University building has been a museum for over 34 years.   What first started out as the “Lane Museum” is now continued as the “Territorial Capital Museum.”

In mid-2016, we realized that our roof really needed to be replaced.  The roof that had been installed in the late 1970’s to early 1980’s was really starting to be a problem.  We received grant funding from Douglas County Community Foundation for $10,000; Capitol Federal Foundation for $20,000; and Douglas County Heritage Conservation Council for $26,760.  We put a new metal roof on our historic building, along with a roofing membrane called TPO (thermoplastic polyolefin) that will keep the rain and sleet out.  The four chimneys also received some tuckpointing, sealing, and new caps.  Our new roof should last for many, many years. 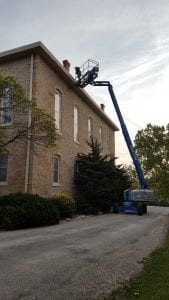