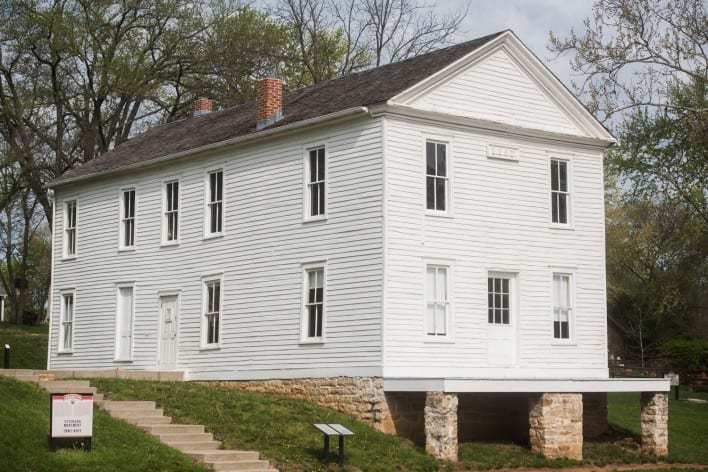 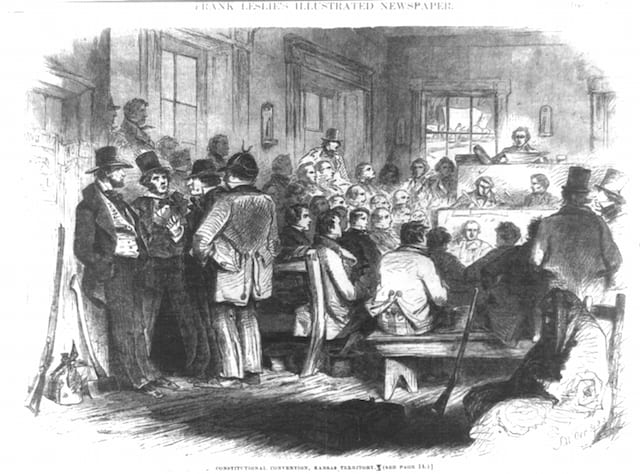 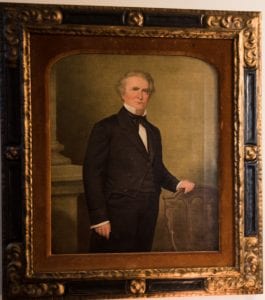 Members of the Lecompton Constitutional Convention met in Lecompton the first week in September of 1857. They opened their convention on the second floor of Constitution Hall on September 7th and remained in session for four days. After electing permanent officers and choosing a slate of committees, they recessed until October 19, 1857. On that day, delegates began arriving in Lecompton, but it took several days until a quorum was present and conventioneers could begin their work. The convention began to work seriously on October 28th when draft sections of the constitution were addressed by various committees.

By November 6th, these committees easily completed most of the work on the main body of the Lecompton Constitution. This document was very similar in nature to most western state constitutions. Much of its wording was lifted directly from older state constitutions. This Kansas constitution provided for three branches of state government, selecting a permanent capital, qualifications for voting in the election of state officials, legislative apportionment, and state laws related to banking, land grants, and internal improvements.

The most critical debating point to be resolved in the final days before adjournment was the slavery clause, Article VII, legalizing slavery in the state and the issue of submission or non-submission of the entire constitution to the people for a vote. On November 6-7, 1857, the convention, divided between moderate and pro-slavery radicals, vigorously debated these two issues before finally adjourning early Sunday morning on November 8, 1857. After 20 hard divisive working days,  the Lecompton Constitutional Convention was completed. Article VII was passed and declared that the right to own slaves could never be taken away from citizens of the state. It was included, promoted by John Calhoun, president of the Lecompton Constitution Convention, and other moderates, to have this slave constitution voted on by all the people of Kansas but was defeated by a single vote by pro-slavery radicals. Now the entire constitution protecting slavery in Kansas would not be submitted to the Kansas electorate but instead directly to Congress for their approval. Convention moderates, led by Calhoun, opposed this, and planned for the partial submission of the constitution. It passed. Kansas voters only would be allowed to vote on a separate referendum that permitted a choice of ballots marked “the constitution with slavery” and “constitution without slavery.” The people were not allowed to vote on the entire constitution. This referendum guaranteed the right to keep and own current slaves and their children in slavery in perpetuity even if “the constitution without slavery” won. Only the extension or introduction of new slaves would be prohibited therefore the approximately 300 slaves in Kansas Territory in 1857 and their descendants were to remain slaves whether Kansans voted for or against slavery.

Between the time of the election on the constitution on December 21, 1857, and the election for new state and federal officers on January 4, 1858, a provisional government was to be headed by John Calhoun. The schedule also stated that no new amendments were to be added to the constitution until 1864.

With free state Kansans refusing to vote on the Lecompton Constitution on December 21, 1857, “the constitution with slavery” was overwhelmingly approved by 6,000 to few than 500.

During the January election for state offices under the Lecompton Constitution, many free state men also refused to vote. More than 6,500 votes were cast with both sides claiming victory and the outcome left uncertain until March 19, 1858 when John Calhoun would publish the results while in Washington, D.C.

Yet another vote on the Lecompton Constitution was held January 4, 1858 in accordance with an act passed in early December by the extra free state legislature. The results only showed 200 votes for the constitution either with or without slavery and more than 10,000 against it altogether. This was an impressive display of free state voting numbers. 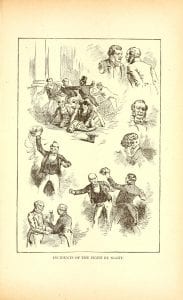 Fight in Congress over the Lecompton Constitution.

The Senate rejected the House substitute bill, so both side were deadlocked until April 13, 1858, when the Senate acquiesced and asked for a joint conference committee of House and Senate members to seek a compromise. This committee produced on April 3, 1858 the compromise English Bill named for Indiana Congressman William English. This bill reduced the enormous federal land grant that the original Lecompton Constitution had demanded for Kansas from the federal government to a smaller grant of 4 million acres the average size given to most states. This bill would not allow the people a fair vote on the Constitution.

If Kansans accepted the Lecompton Constitution with the English Bill, Kansas would be admitted as the 16th slave state at once and receive the much needed federal land grant to finance internal improvements in the new state. If the Lecompton Constitution was rejected, a new constitutional convention would be convened and Kansas would remain a slave territory until it had a population of 90,000 residents. Kansas population in 1857 totaled no more than 25,000 to 30,000. Consolation for the Buchanan administration and pro-slavery Southerners were that free state Kansans would be penalized for rejecting the Lecompton Constitution by having statehood postponed indefinitely. On April 29, 1858, the English Bill was passed by the Senate 31 to 22 and the House 112 to 103.

Read more about the national controversy over the Lecompton Constitution: https://www.dailykos.com/stories/2016/3/7/1497708/-When-Political-Parties-Implode-Pt-1-The-Fraud-of-the-Lecompton-Constitution 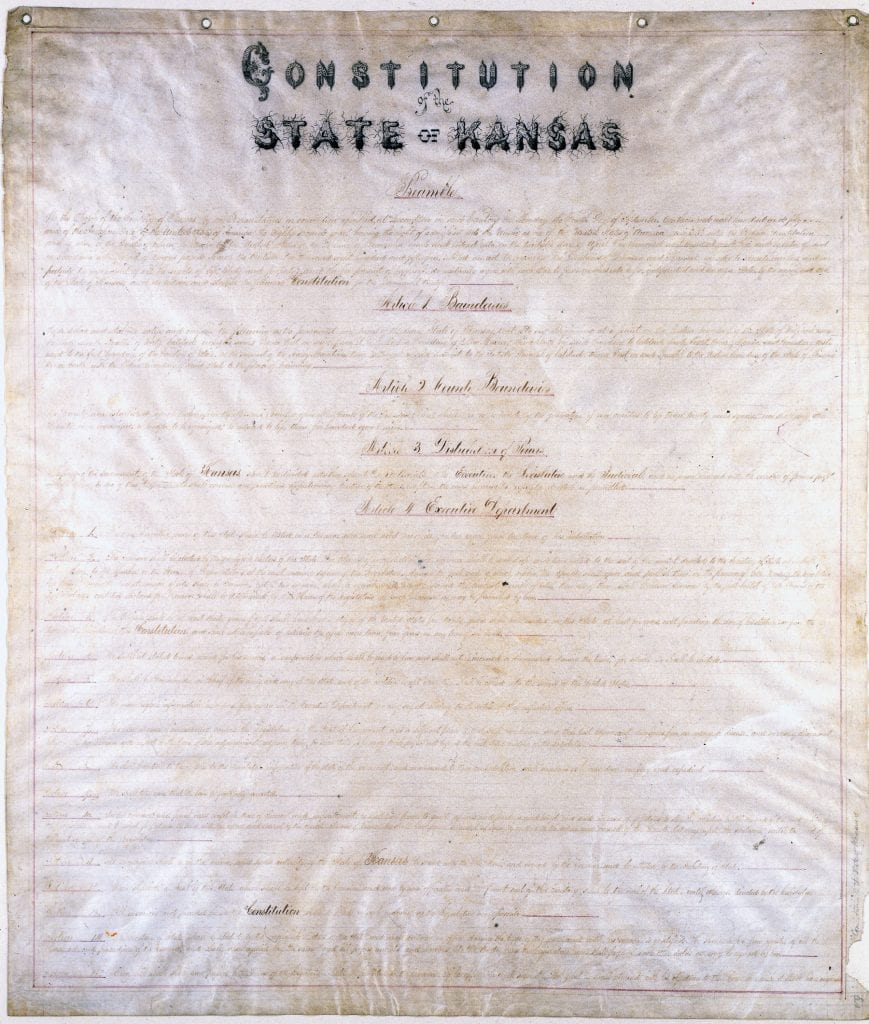 First Page of the Lecompton Constitution