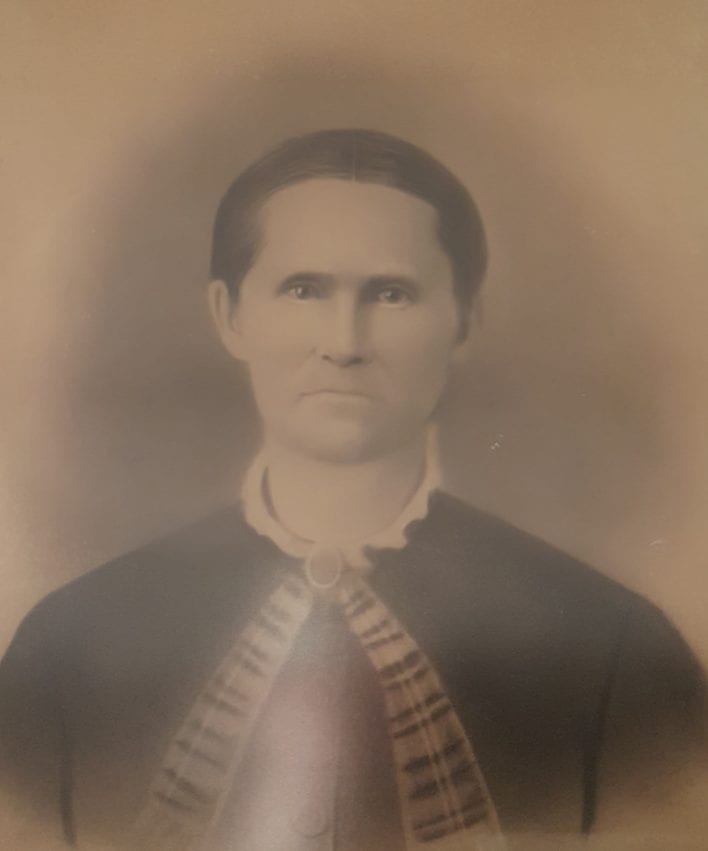 Mary Ann McClanahan and her family were some of the first settlers in Kansas Territory.  Mary’s father, George Zinn, moved from Missouri to a half mile west of what would become Lecompton with his wife and young children.  He staked a land claim for himself and also a claim for his daughter Mary and her husband John Green McClanahan.   Mary and John would join them in Kansas Territory just a few months later in November of 1854.

Mary had just married John G. McClanahan a little more than 4 years earlier.  They started their family with a daughter, Martha Ann, then a son—named after Mary’s father– George.  Although there is some discrepancy in the information, it is inferred, sadly, that little George was buried shortly after they arrived in Kansas Territory. 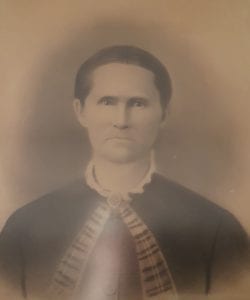 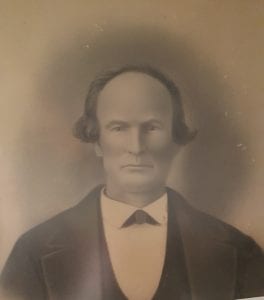 The trip from Missouri lasted ten days in a covered wagon.  They started November 10th and traveled through heavy snows, tacking quilts over the top of the covered wagon and huddling down with the two children among other quilts trying to keep warm.

The McClanahan family stayed with the Zinns when they arrived that winter.  George Zinn had already built a 10 x 18 foot cabin with puncheon floors (split logs) on his claim, and he had some livestock to eat.  He had driven cattle and pigs with him to his claim when he arrived in June of 1854. 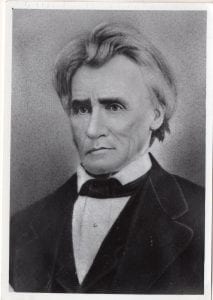 Mary was a witness to Kansas in its infancy.

In its very early days, Lawrence, about 15 miles southeast from their homestead, was a town of scattered tents.  At the age of 95, she reminisced during an interview with the Topeka Daily Capital that people couldn’t even buy groceries in Lawrence.  Once or twice each winter her husband had to drive to Kansas City, coming back with a wagon load of flour, sugar, beans and coffee.  He sold some to the families living near-by.

Mary spun the wool for her family’s clothes on her spinning wheel.   They raised their own sheep, sheared them, washed and carded the wool, and sent the spun wool to a professional weaver.

She lived near Lecompton in her cabin with her family (eventually having–sources vary– eight children surviving to adulthood) during the tumultuous time period known as Bleeding Kansas.  She saw the smoke of the raids between the pro-slavery folks and the free-soilers.  She heard the noise of the guns, learning from her husband how this man was killed for killing another, and how this man was killed for insulting the governor.  She recalled how the Indians never gave them any trouble.  It was the white people with whom they were always having trouble.  “Robbers were always stealing our horses,” she said in the March 11, 1928 interview in the Topeka Daily Capital.  The McClanahans were fortunate that they didn’t receive retaliation from the pro-slavery supporters for their close association with George Zinn.  He served as a representative to the first Territorial Legislature in 1857-1858 in Constitution Hall in Lecompton when the pro-slavery government was voted out. 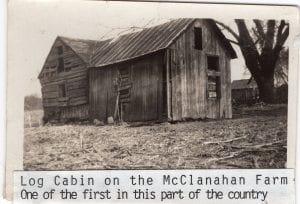 Photograph from the Territorial Capital Museum in Lecompton, Kansas.

Miles away at her home, she could see the smoke at Lawrence when the town was raided by Quantrill’s band in 1863 during the Civil War.  Mary Ann visited the town two weeks later.  “The town was a sad sight,” she said in the interview.  “The buildings were burned down, and there were charred bodies of horses lying around in the street.”  She tended to the farm when her husband left to serve in the war as a Corporal in Co. B, Reg. 3, in the Kansas Militia. 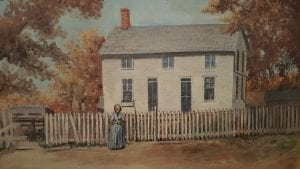 In 1881, the McClanahans built a substantial home about 100 yards from their original log cabin.  For many years, Mary enjoyed visits from her family and friends.  John died in 1905.  At the time of her death in December 1928, she had 111 living direct descendants.   Many of these still live in the area.  She quietly endured the hardships of settling in Kansas Territory.  Her legacy lives on through her descendants. 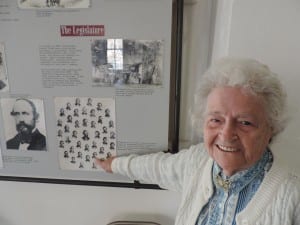 Iona Spencer is a descendant of George W. Zinn. He is her great-great grandfather. Her great-grandmother was Mary Ann McClanahan’s sister. Photo credit Territorial Capital Museum.

This article was modified from the original article written by Iona Spencer:

History of the McClanahan Family, no author, no date, donated by Minnie Scott (nurse in World War One, and descendant of Mary), call no. A-342 at the Territorial Capital Museum in Lecompton.